We deliberately chose substances that make it possible to evaluate the selectivity of stationary phases as differentiated as possible: from hydrophobic ethylbenzene to strongly basic benzylamine. This premise was also taken into account in the chromatographic conditions: isocratic runs, methanol/water mixtures, no buffer, no increased temperature etc.

Suitable substances and chromatographic conditions for the goal set with Colona

In RP-HPLC, in addition to the steric aspects (molecular recognition) hydrophobic and polar interactions play an important role with regard to selectivity The polar interactions can be hydrogen bonds, π-π- or ion exchange interactions. For a comprehensive comparison of columns, all these characteristics must be able to be revealed. The selected chromatographic conditions must also allow the differences present to be seen as far as possible. Thus, the use of buffers and gradients leads to "good-looking" and at times similar chromatograms, which, however, is against the goal we are aiming for here. This is also the case with acetonitrile as an organic solvent: tailing due to additional ionic interactions is more pronounced in a methanol/water eluent than in an acetonitrile/water eluent. 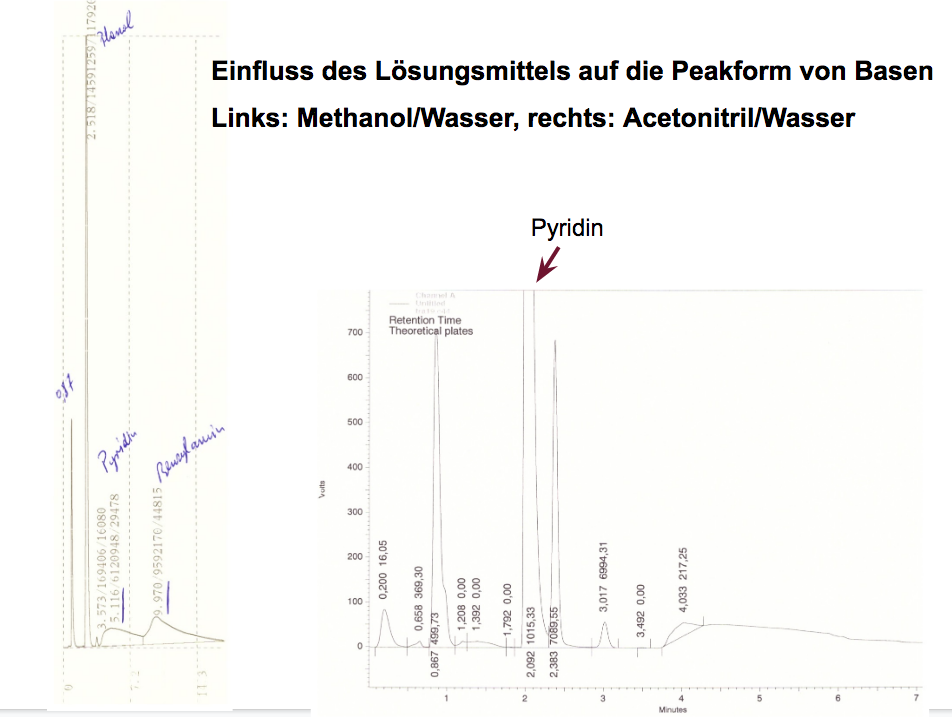 In methanol/water shows pyridine a much stronger tailing than in acetonitrile/water.

In the course of the tests, almost 50 substances with different properties were tested: Strong/weak acids/bases, polar/non-polar, small/large, aliphatic/aromatic, planar/non-planar molecules, complexing agents, etc. The tests were performed under different chromatographic conditions: methanol/acetonitrile, acidic/neutral/alkaline, different temperatures and different elution strengths. The comparison of the results finally shows the following: with the help of three isocratic runs (100% methanol, 80/20 methanol/water, 40/60 methanol/water) and certain analytes (see below), the different properties of the stationary phases with regard to selectivity can be determined quite accurately. The remaining tests with the remaining components and under other chromatographic conditions only confirm these results. The first five analyte pairs have the highest informative value; the remaining four are suitable for fine differentiation and are addressed to the very interested user:

We use tools that have proven themselves from a practical point of view:

Here the columns are sorted according to the alpha values (selectivities): e.g. ability of columns to separate polar and non-polar components - hydrophobic selectivity. Finally, we have created some bar charts for other model substances for interested users.

Here you can find the most similar/different columns to your column according to certain criteria (e.g. overall similarity / difference or steric similarity/difference). Use in this case the RP-Column-Finder

They are well suited to visually represent the similarity or difference of columns. The principle: the alpha values for the separation of certain analyte pairs (the more different the selected analytes are, the more reliable the statement becomes) represent the corners of selectivity web charts. It is normalized to the highest alpha value reached. You obtain the following two info’s directly: 1. the higher the alpha value, the more selective the column for these analyte types is; 2. the more similar/different the web charts of, for example, two columns, the more similar/different the selectivity characteristics of the columns concerned. This concerns first of all the character of the two columns (e.g. "hydrophobic" or "polar"). The comparison of the separation capability, on the other hand, is about how similarly "well" the two columns can separate certain analyte types - independent of the elution sequence. To do this, we consider only the magnitude of the alpha value, regardless of whether the value positive or negative is: the alpha values may be inverted.

Here you can see the most hydrophobic and most polar columns at a glance.

By means of this application it is possible to directly compare any column with any other column by means of alpha values, or alternatively several columns.

Selectivity web charts are suitable for visualizing the similarity/difference of columns. The principle: the alpha values for the separation of certain analyte pairs (the greater the difference in the selected analytes, the more reliable the statement becomes) represent the corners of selectivity hexagons, pentagons or triangles. The charts are normalized to the highest alpha value reached. The higher the corresponding alpha value, the more selective the column is for these types of analytes. Note: the focus here is exclusively on selectivity, not peak symmetry. You can look at the web chart of a certain column or also the web charts of several columns at a glance.

Scale: The scale of the spectrum goes from 1 to alpha-max, the largest alpha value of all columns. The fact that the scale starts at 1 means that for all columns with elution reversal, the alpha value was inverted.

The dashes on the scale correspond to the individual alpha values of all measured columns. This gives an overview of the distribution and enables the classification of the column under consideration. Have a look at the table (Details)

Rank: In order to determine the rank, the alpha values were inverted again in the case of elution reversal. Columns with identical alpha values (rounded to two decimal places) share the rank. Therefore, there may be fewer ranks than columns. Or, for example, with "steric selectivity" fewer ranks than with "hydrophobic selectivity", although the same number of columns were measured.

Regarding polar selectivity: The polar character should be considered in a more differentiated way, since different polar interactions are possible. A first indication of polar selectivity is provided - in addition to the overview selectivity map - by the bar charts steric and aromatic selectivity (accessibility silanol groups, π-π interactions). The alpha value Phe/EB (Phenol/Ethylbenzene) provides an indication of stronger polar interactions or hydrogen bridge bonds - e.g. for acids. Finally, the alpha value Benz/Phe (benzylamine/phenol) would be a measure of the ion exchange/hydrogen bridge bond ratio: Thus, an irreversible adsorption of the strong base benzylamine (alpha-value Benz/Phe nominally greater than 20) indicates the tendency of the corresponding stationary phase to strong cation exchange interactions and thus exhibits a strongly polar character. Using the selectivity maps and the bar charts, alternative columns or, vice versa, quite different columns can be selected for orthogonal tests (e.g. to check peak homogeneity) or for equipping a column selection valve.

In the table you will find the physico-chemical data of the columns, the separation factors alpha, functional group etc. Of course you can sort the data as you like.

The chemistry behind the scenes

Selectivity is used as the classification criterion, indicated as the alpha value of meaningful analyte pairs, determined under isocratic conditions.

Justification for the use of alpha values as a criterion for the comparison of columns:

Firstly, alpha values represent a measure of the selectivity and that has by far the greatest influence on resolution (separation of peaks at the peak base). Under constant conditions (eluent, temperature), the influence of the stationary phase on the separation becomes clear. Furthermore, alpha values allow the comparison of stationary phases independent of actual column dimensions and flow. Secondly: we think that from the user's point of view of interest are questions such as: "which column separates like XYZ? Or: "which column is completely different from...?", "which columns show good selectivity for the separation of...?" It's about the separation, after all. From a practical point of view, it may not be so essential to know whether the interactions on these two columns are similar, i.e. whether the components elute with the same retention factor, k. The asymmetry factor also appears less useful to us as a criterion: if the packing quality of the column decreases or if there is a dead volume in the system, band widening/tailing can be incorrectly assigned to possibly silanol groups. Remark: Alpha = 1 means coelution. The greater the difference between the measured alpha value and "1", the more selective, i.e. the more "separable" the corresponding phase is for this type of analyte. The number can of course also be less than 1 (elution reversal) - the capability of the phase to separate these analytes is of course also given in such a case.

In the literature "hydrophobicity" (retention factor k of a non-polar component), sometimes also the asymmetry factor, mostly of a base, is often used as a criterion. So, if this tool gives you similarity/difference correlations of columns other than those given in the literature or on pages from column manufacturers, the cause could be the reason given above. Possibly also that the work carried out here is exclusively buffer-free and isocratic: buffers lead to a better peak shape - just like a gradient - but equalize differences between stationary phases, which would be counterproductive to the goal here. And finally: we carry out the tests with methanol/water mixtures, since acetonitrile leads to a "good-looking" peak shape due to its low viscosity. Methanol/water mixtures, on the other hand, show more "honestly" the differences between stationary phases.

In the following five cases, it is best to look at the bar charts:

Or else, you just don't know; then go to "Tips for an unknown sample"

You can find information on the selectivities explained below in the overview selectivity map and also on the individual selectivity bar charts.

Polar selectivity 1 (α Phe/EB): Capability of the phases to separate analytes with a difference of a CH3 - or -CH2 -CH3- vs. OH-group (see bar charts α Phe/EB and α Phe/T). Analogous to the hydrophobic selectivity, a high or low (α < 1) alpha value α Phe/EB indicates the ability of the corresponding phase to separate analytes with an acidic group - independent of the elution order

The alpha value Benz/Phe (benzylamine/phenol) can be seen as a measure of the ion exchange/hydrogen bond ratio. Furthermore, a strong tailing and a long retention time or even an irreversible adsorption of the strong base benzylamine (alpha value Benz/Phe nominally greater than 20) reveals the tendency of the corresponding stationary phase to strong cation exchange interactions, thus showing a strong polar character. The result is a peak form of benzylamine varying from a non-evaluable peak to a quite symmetrical peak, see example (left Fig. 15). On these 12 columns (exemplary!) the peak form of benzylamine is very good: there are no (accessible) acidic silanol groups on the surface and thus hardly any cation exchange interactions take place, the result: symmetrical peaks even with strong bases. Note: the benzylamine test is a very strict test.

No; the Benzylamine-Test is a very strict test. In the case of strongly polar phases such as PFP or older materials containing acidic silanol groups, irreversible adsorption is observed or benzylamine is eluted as a peak that cannot be evaluated. For this reason, for 35 columns a theoretical alpha value Benz/Phe for benzylamine/phenol of 20 is used in the preparation of the web charts. Unfortunately, we were unable to obtain the relevant information from either the literature or the manufacturer for the missing data on the physico-chemical properties of materials.

Software updates/grades are made irregularly as required. Regarding the addition of new columns, the procedure is as follows: The team observes the development in the market and announces interesting products; experience is gathered and the most interesting columns are tested. Every two years an expansion takes place, the number of new columns can naturally fluctuate.

No, not directly; most manufacturers have made their columns available to us for understandable reasons. We bought some columns. The database as such is strictly neutral.