The silica gel matrix and the particle size

heavily contaminated sample, difficult matrix e.g. biological material, environmental sample, plant extract, food, animal feed, starch, polymer matrix etc.? Think first of monoliths (e.g. Chromolith Performance/Onyx). If it is to be a porous material, then tend towards one with a large specific surface area (&gt;  350 m 2 /g). Furthermore, is gradient elution planned, as more than approx. 10-15 peaks are expected? If both questions (difficult matrix, gradient) are to be answered with &quot;yes&quot;: with a focus on a long column life, in the case of a porous material 5 µm would be preferable; only if thorough sample preparation can be guaranteed in routine operation could you also possibly think about 3-3.5 µm material or smaller or of Core Shell phases.

Does the sample contain the following substances?

... then more suitable are polar stationary phases, e.g. silanol-containing materials, PFP (pentafluorophenyl), biphenyl, mixed-mode, EPG (embedded polar group) phases. However, you would have to accept problems regarding reliability in everyday life (batch reproducibility, difficulties with validation, etc.). Note: the reference "polar stationary phases" aims at the highest possible selectivity; this in no way means that with hydrophobic materials a satisfactory selectivity for polar components, sufficient for the given purpose, would not be possible.

For all other cases such as

…are hydrophobic phases more suitable, with acetonitrile as organic solvent.

Methanol often shows better selectivity in such cases than acetonitrile, for example π-π interactions are suppressed in acetonitrile.

Firstly a summary of key statements:

"With acetonitrile and buffers, differences fade into the background."
At a certain pH value of the eluent acidic or basic molecules are neutralized, the buffer perhaps being used ensures a constant pH value. Some or all of the components are therefore present in a neutral form, so with an RP material there are predominantly neutral interactions. Now, it is true that neutral, hydrophobic, in other words typical RP interactions are not particularly characteristic, the result being that individual differences of the components (e.g. differences in the ionic character) fade into the background. This also applies to the stationary RP phases, additional polar groups (silanol groups, other polar groups) which may be present – and which are responsible for the differences between the phases - can hardly come into action against neutral species. This effect is much more pronounced with acetonitrile in the eluent than with methanol. Simplified conclusion: With acetonitrile and buffer - especially in alkaline – you do a kind of "levelling out"; the individual differences of the stationary phases regarding selectivity are hardly noticeable. This is the main reason why when using acetonitrile and buffer, different columns often produce very similar chromatograms, see the following two examples: although the four Waters columns used here do have different properties, the chromatograms are quite similar. This applies both to the separation of bases and acids. 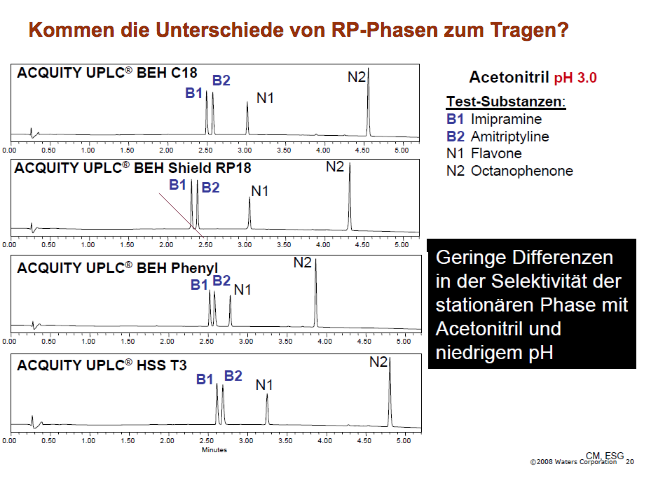 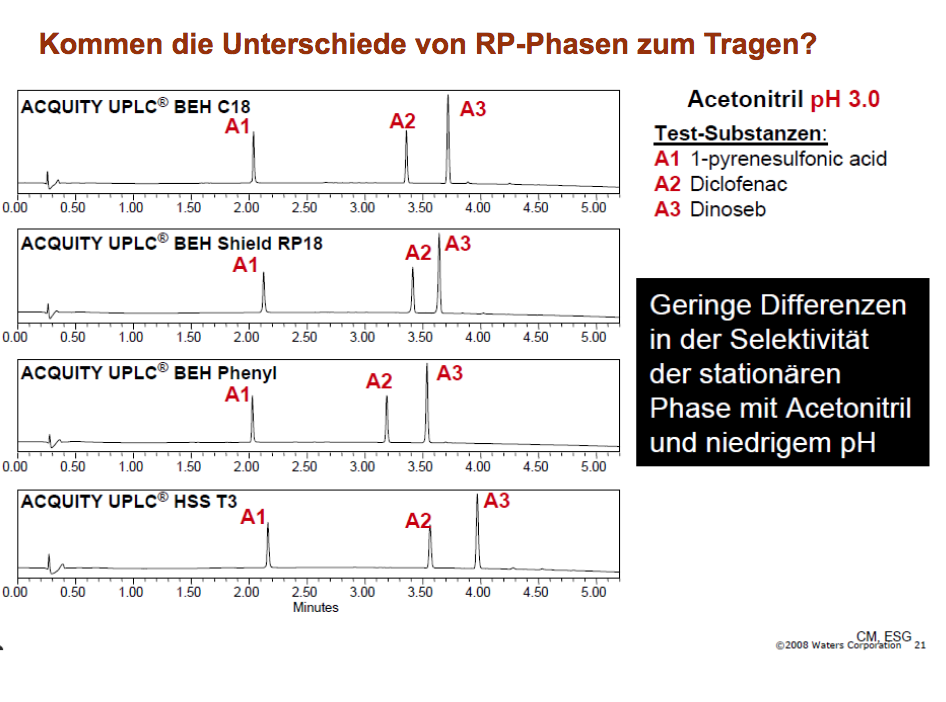 "Methanol: advantages in the case of polar components and polar phases"

Even in a deliberately unfavourable constellation (strong bases and acidic buffer) methanol proves to be advantageous: 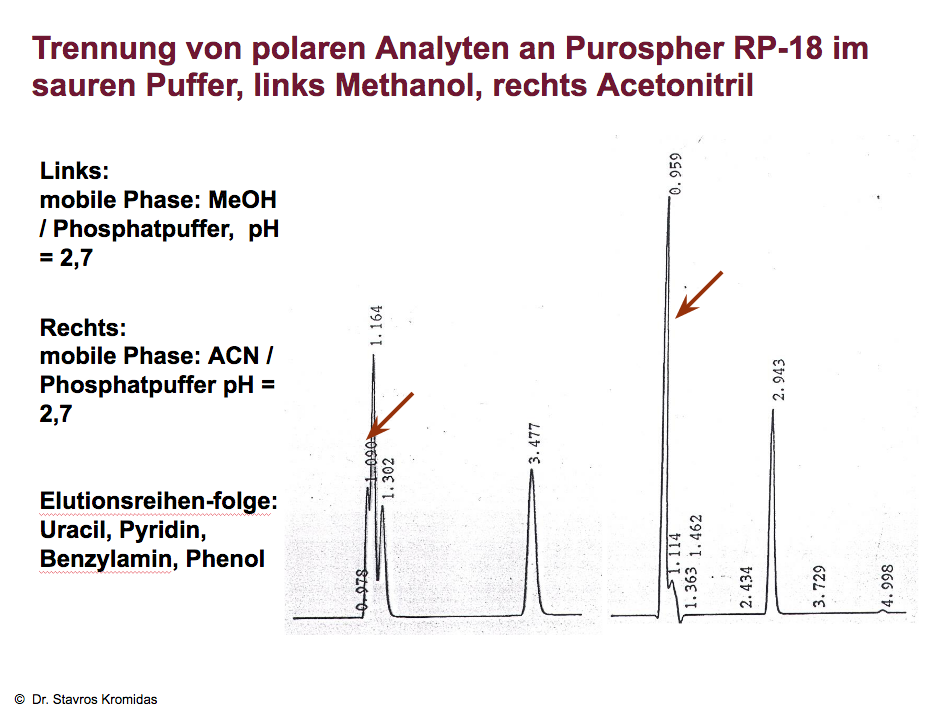 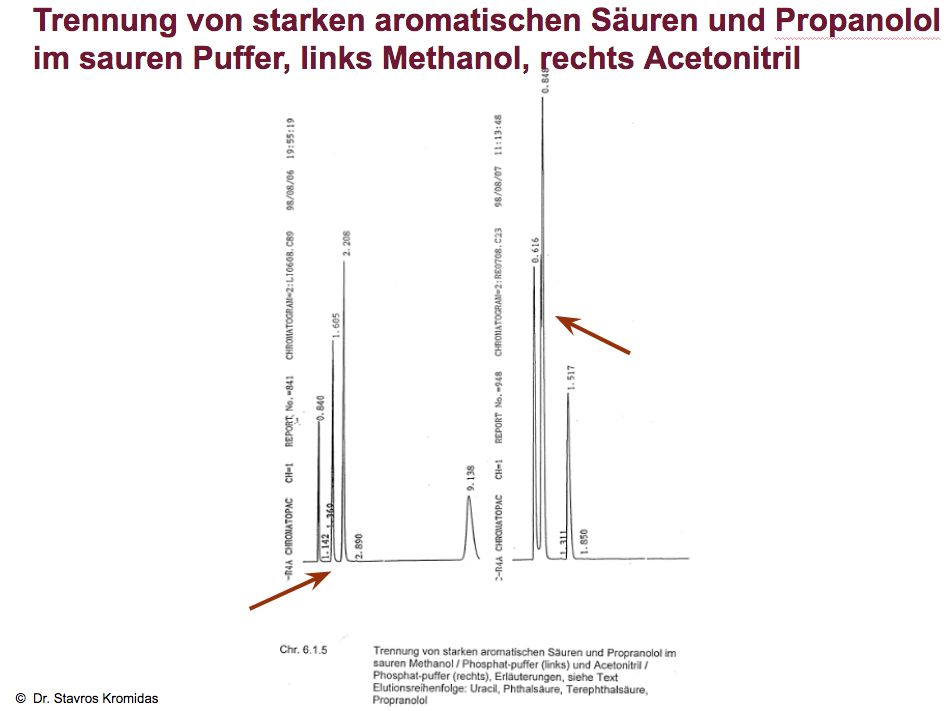 In the case of molecules with similar structure (isomers, phospholipids, steroids, etc.), polar interactions are advantageous for the separation, i.e. columns with a polar character are required. Furthermore, also in this case methanol often shows a better selectivity for polar components compared to acetonitrile. Here an example: a mixture of uracil, aniline, phenol, o-, m-, p-toluidine, ethylbenzene and fluorenone was injected onto different columns at 60/40 methanol/water. Classic, endcapped C18 phases cannot offer polar interactions to the three positional isomers, as a result only two peaks are obtained for the three isomers, and the chromatograms with such columns look almost identical. 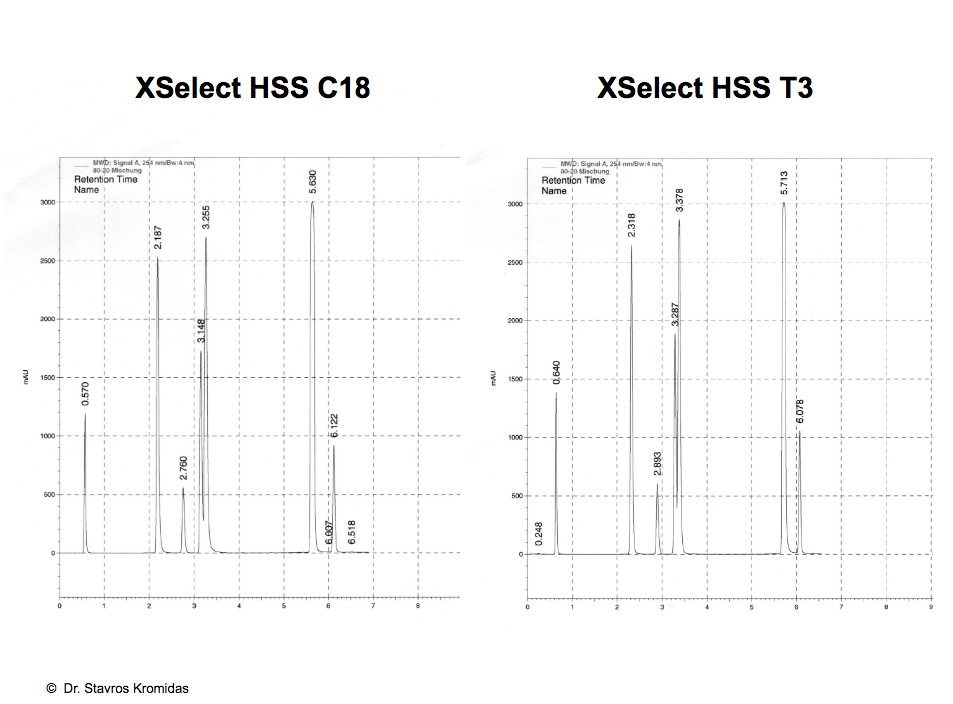 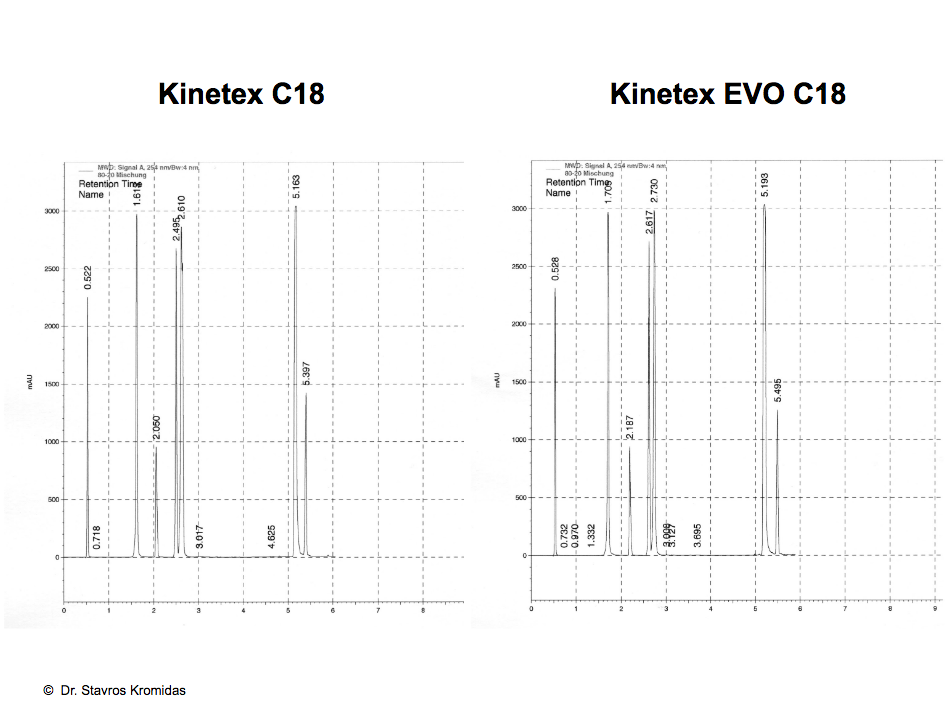 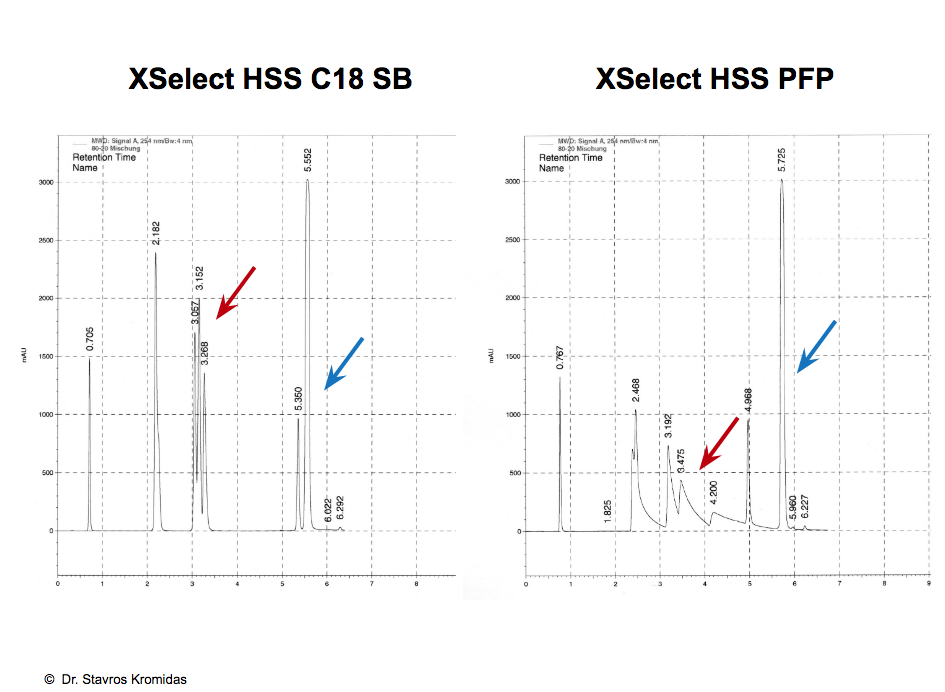 As soon as polar interactions are possible (silanol groups, PFP group), the selectivity for the separation of the toluidine’s is improved, note also the elution reversal with ethylbenzene/fluorenone (blue arrow Fig. 8), see also further below. However, additional polar interactions often lead to a deterioration of the peak shape. A simplified recommendation: "Polar components and/or similar structures? Use a polar column plus methanol (plus low temperature, e.g. 10-15 °C) for good selectivity and be willing to compromise on peak shape and retention time as well as column stability and batch reproducibility".

Here the separation of polar components is shown, left with methanol, right with acetonitrile. Findings: With methanol a very polar component is almost baseline separated from the dead time peak (uracil), also phenol and benzylamine are well separated. With acetonitrile, the polar impurity at the dead time peak is just hinted at as a disturbance, phenol and benzylamine coelute. 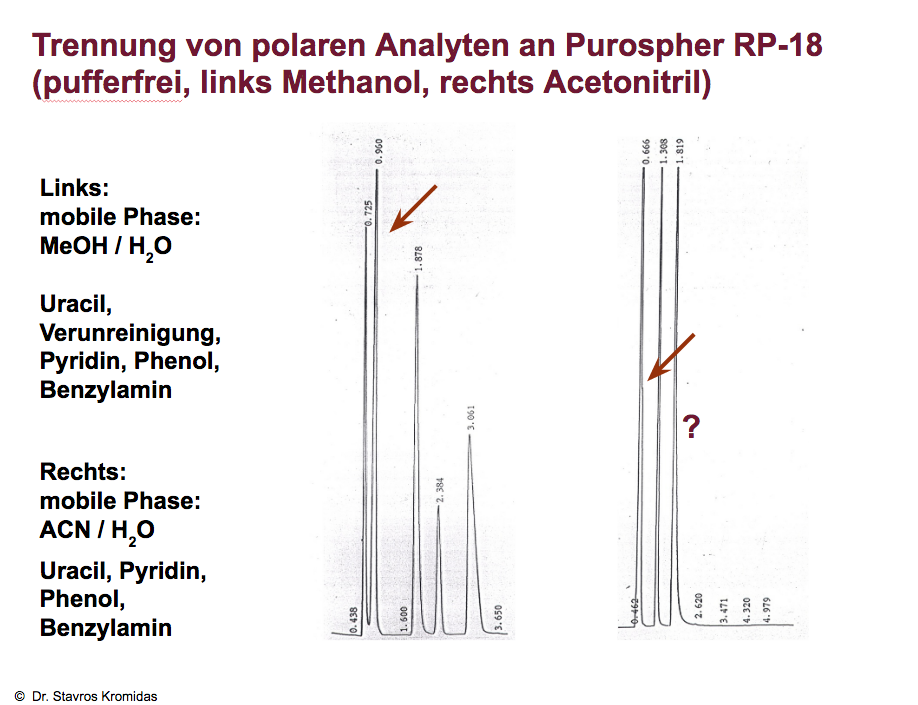 In this diagram the alpha values for the separation of two isomers, 3- and 4-nitroaniline, are shown on various columns, blue in acetonitrile, red in methanol. Findings: The alpha values in acetonitrile range between approx. 1.0 and 1.35, in methanol between approx. 0.85 (elution reversal) and 1.45. This means: "With methanol the columns show a much greater range of selectivity". 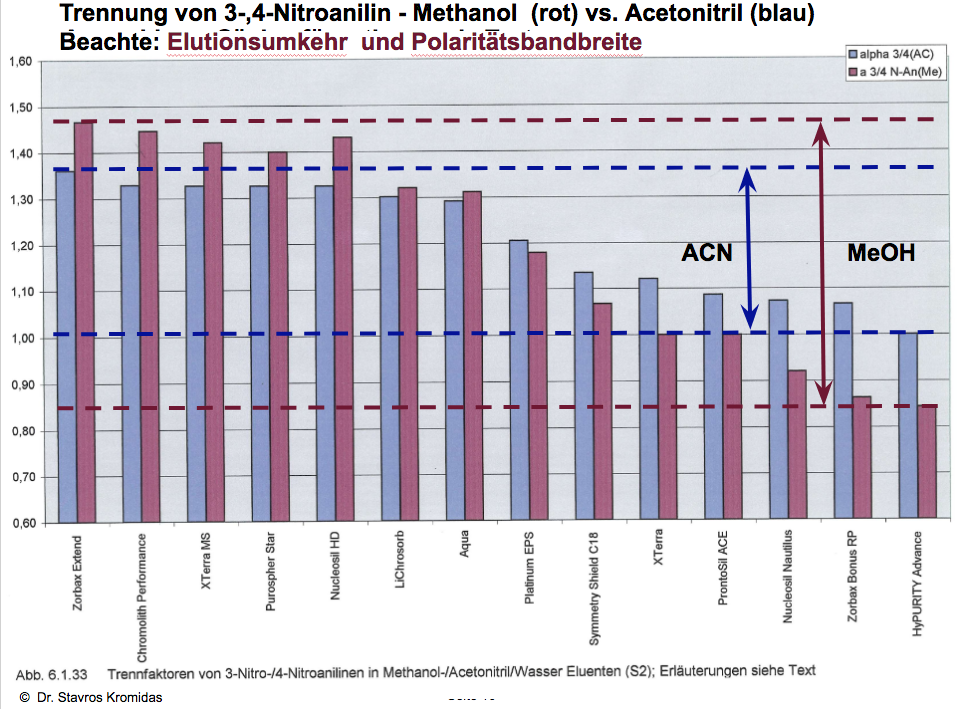 As noted above, neutral interactions are not particularly characteristic. Such effects occur in the case of neutral components or components neutralized via the pH value. In such cases, the stationary phases can hardly unfold their individuality with regard to selectivity, three examples illustrate this: 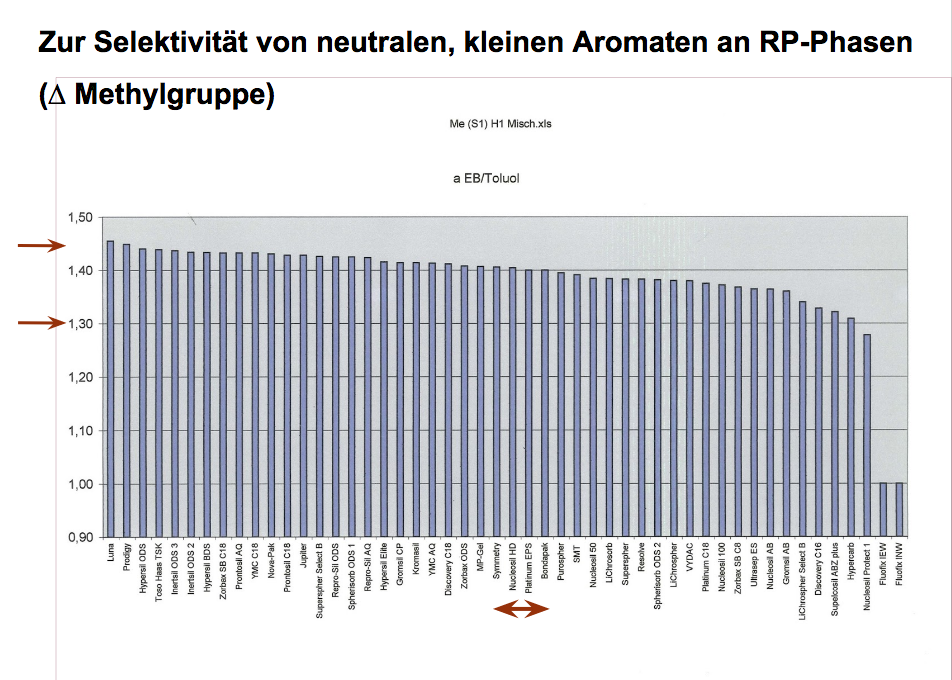 In this diagram, the bars represent the alpha values for the separation of ethylbenzene/toluene, a typical RP analyte pair (methylene group selectivity, difference only one CH2 group) on various columns. The alpha values on quite different columns - e.g. Symmetry C18 and Platinum EPS - are very similar; overall the values range between 1.30 and 1.45. If on the other hand polar interactions are also possible, e.g. simply by an additional oxygen in the separation of fluorene/fluorenone (link bar chart), then alpha values between 1.5 and 3.4 result. Also in the separation of ethylbenzene/fluorenone (link bar chart), due to additional polar interactions the alpha values range between approx. 0.45 (elution reversal) and 1.75. One can state as follows: "If (additional) polar interactions are possible, the individual differences of the stationary phases with regard to selectivity take effect; otherwise the chromatograms look quite similar". 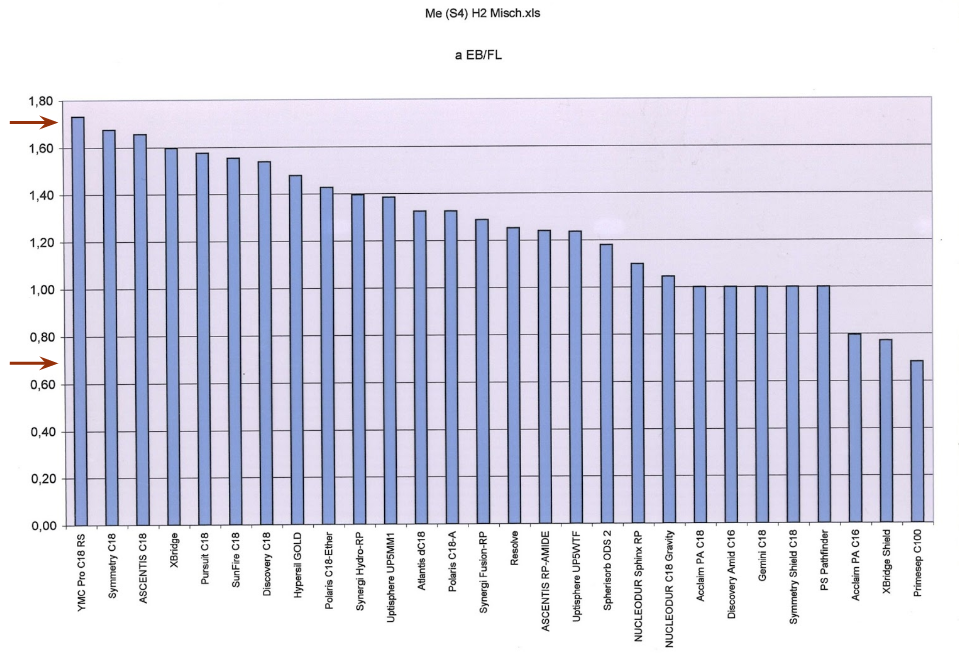 In simple terms: "Same with the same", e.g. strong acids are present in the (partly) ionic form, for good selectivity stationary phases with a polar character are required, see for example the following result 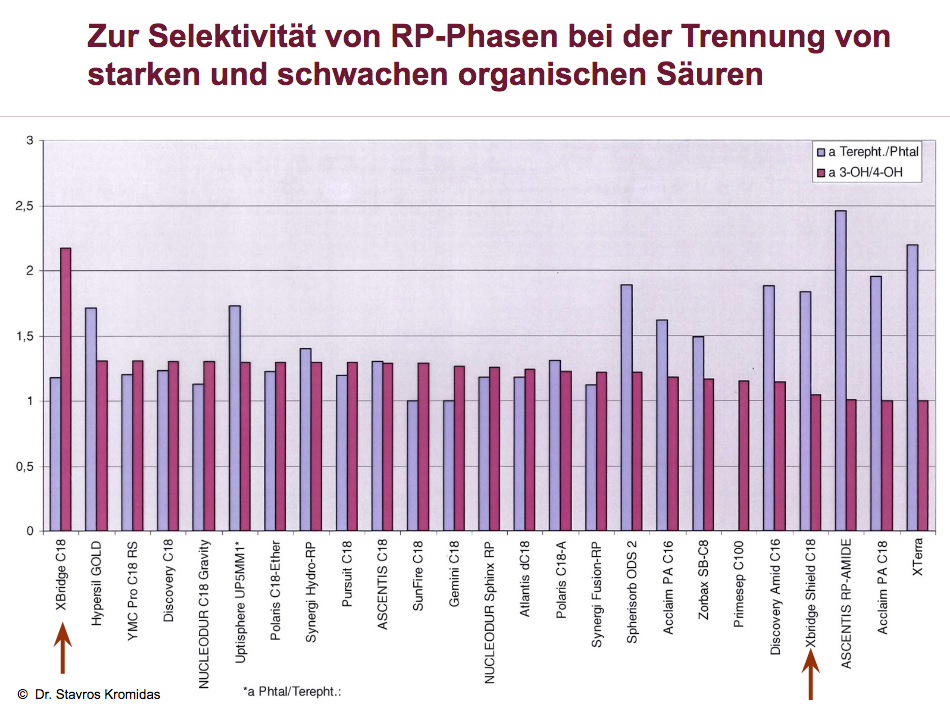 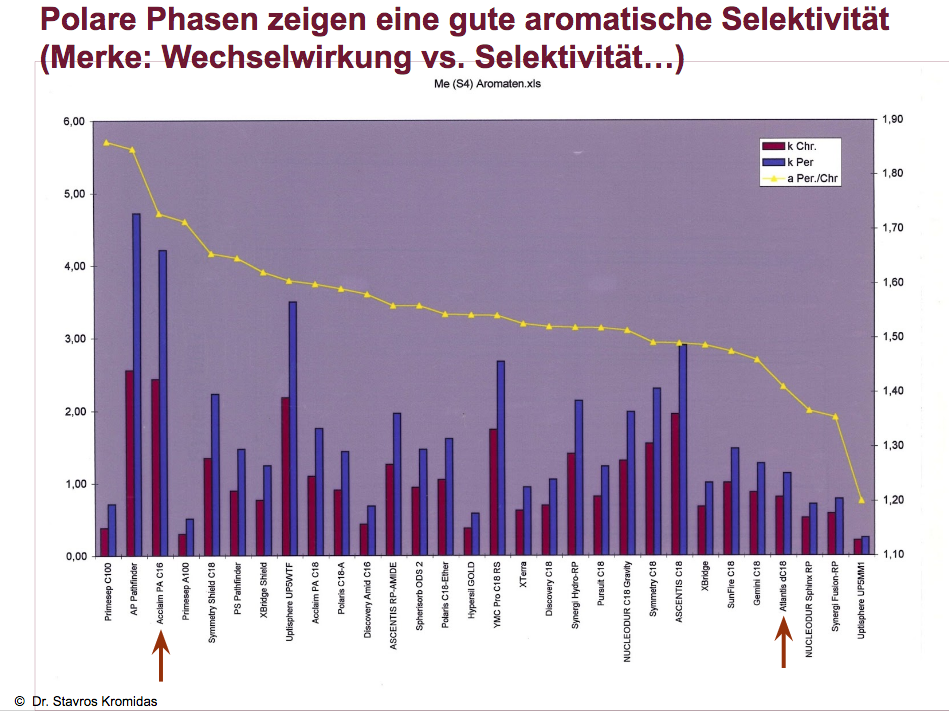 "Good aromatic selectivity is shown by stationary phases which have either a polymer/polymerized layer on the surface or which above all are capable of polar interactions", see diagram). The polar version of Acclaim (Acclaim PA C16) shows a better selectivity for the separation of chrysene/perylene compared to the hydrophobic Acclaim C18; the yellow line corresponds to the alpha values. Furthermore, in no case does stronger interaction mean better selectivity. Aromatic compounds make up a large part of the components to be separated in HPLC. With the help of selectivity web charts (link to D FAQ 4), the rules presented here for the separation of polar and non-polar aromatic compounds can be exemplarily demonstrated.

How do the characteristics of the phase surface influence selectivity?

Phases showing good hydrophobic selectivity are located in the upper part of the "central selectivity map" (large alpha value ethylbenzene/fluorenone). These are phases that have the following characteristics: high loading (roughly about > 17-18 % C), and/or "polymer bonding", furthermore hardly any active (= acidic, dissociated) silanol groups - these are the "good", classic C18 phases. With strongly polar phases such as mixed-mode, biphenyl or PFP phases, elution reversal occurs, the selectivity - with negative alpha values! - is also very good

A distinction should be made here as follows:

Silanophilic phases: phases having dissociated silanol groups. These are, for example, older, non-endcapped materials, which are strongly silanophilic, e.g. Zorbax ODS, Hypersil ODS, Spherisorb ODS 1, Bondapak, LiChrosorb, LiChrospher/Superspher. With basic samples the silanol activity is particularly pronounced in the neutral/acidic range: very strong interactions with protonated N-containing molecules - up to irreversible sorption on the surface. As a rule, there is good selectivity for strongly polar molecules with, however, often strongly asymmetrical peak shapes. If the molecules are not present in ionic form, that is if ion exchange interactions are not possible, then the other characteristics of the phase in question come to the fore. For example, Zorbax ODS, due to its high carbon content, also exhibits good hydrophobic selectivity. In contrast, a number of more modern, thoroughly endcapped phases hardly show any silanol activity even in the very strict benzylamine test (Test 6 No. 8), even strong bases elute with a good peak shape, e.g. PoroShell 120 EC C18, PoroShell 120 HPH C18, Cortecs C18, XSelect HSS C18, XBridge C18, YMC Pro C18 RS (Link 13, 14, Link peak shape benzylamine). 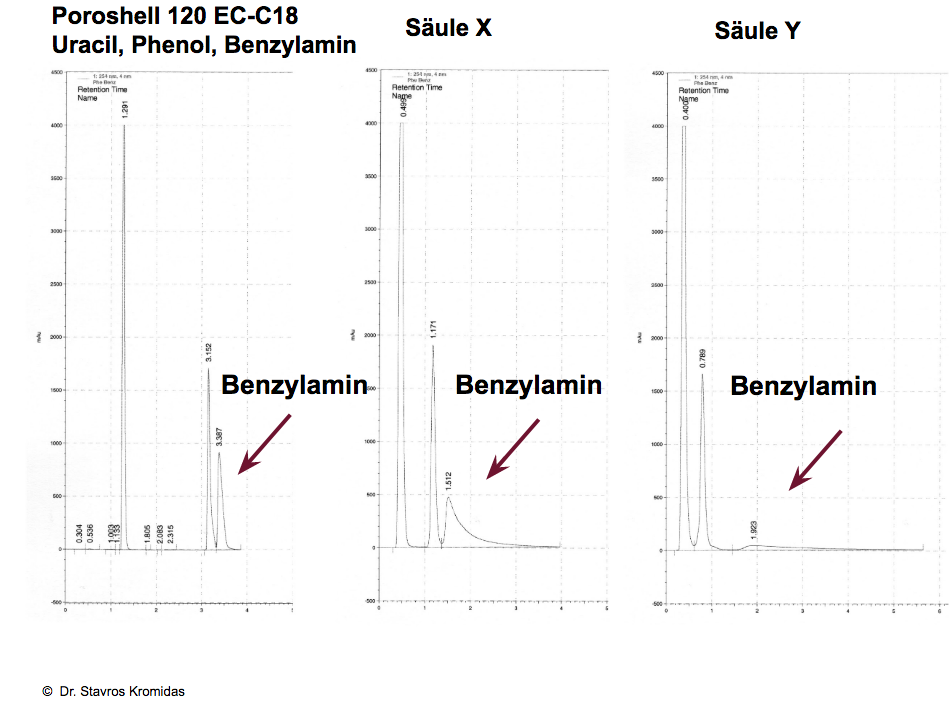 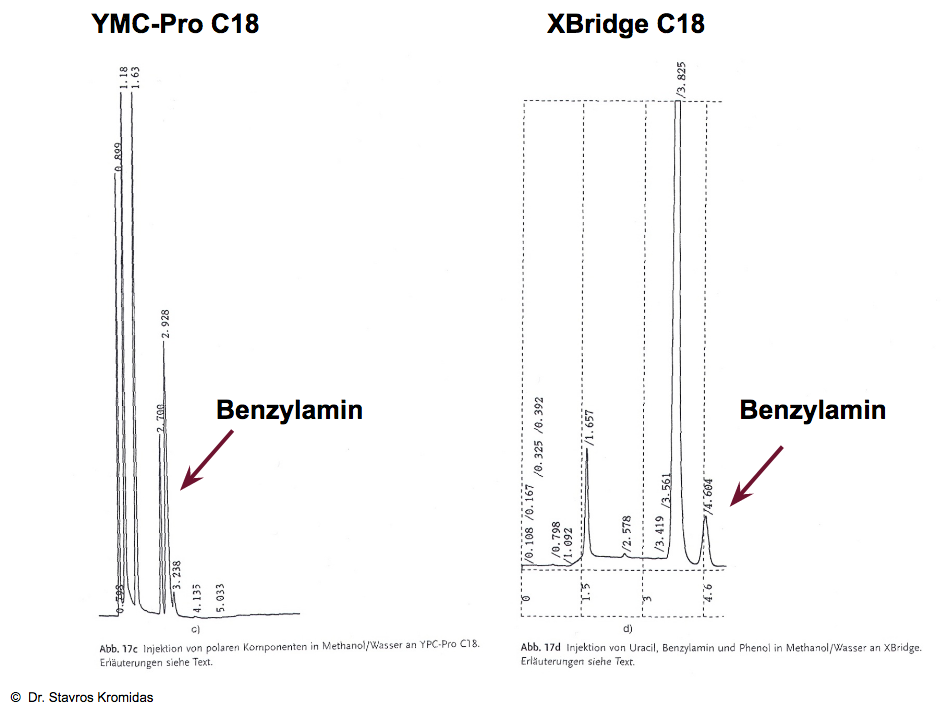 Summarised: For a good polar or a good steric selectivity, phases on the left-hand side of the "central selectivity map" are less suitable. Should one nevertheless decide for whatever reasons for a phase from this area, then a phase with free silanol groups would be preferable to an extremely well covered, hydrophobic, endcapped phase. The chromatograms with the largest differences are obtained (in other words the different properties of the phases become noticeable) when first of all ionic interactions play an important role with regard to selectivity. In second place comes steric selectivity, here too the differences between the phases appear, see also further below. Finally, the choice of the stationary phase in the case of weak, undifferentiated, non-polar interactions is relatively unimportant; the required selectivity can sooner be achieved, if necessary, via the mobile phase.

Hardly any information about the sample?

With which analytes do the differences in selectivity of the phases make themselves least/most noticeable?

Findings from the experiments here: If the components differ in molecular size and polarity ("=O", "OH", aromaticity, position of the functional group etc.), the difference in selectivity of the stationary phases is given by a factor in the alpha values of approx. 3-3.5 (alpha EB/Fl). If, on the other hand, the difference is only a methyl or ethyl group, the factor for the alpha values, taking into account all columns investigated, is reduced to approx. 1.1-1.4 (alpha values Propbenz/Methbenz, propyl-3-hydroxybenzoate/methyl-3-hydroxybenzoate), the phases deliver quite similar chromatograms. With regard to the characteristics of the components to be separated, the differences of the stationary phases come increasingly into effect in this order: ∆ CH2/CH3 group, polynuclear aromatics, planar/non-planar molecules, halogenated substances, isomers, small polar aromatics, strong acids/bases. For the latter, the polar character should of course not be reduced by the pH value and/or the use of acetonitrile, see further above. The following table includes the above said and shows the differences in selectivity between stationary phases that can be expected depending on the type of analyte.

This table makes it clear why it is necessary to define exactly what kinds of analytes are involved before a statement can be made: "This column is similar to...“ For example, in the case of the separation of neutral/neutralized components different stationary phases behave quite similarly (case 1, small differences in selectivity). With the increase of additional polar interactions or the number of possible mechanisms, the differences become more and more pronounced. They culminate in the case of additional ion exchange interactions and with methanol as organic solvent (case 5, very large differences in selectivity).

Combination of stationary phase and components - what can one expect?